I'm hooked on sharing sugary delights... I have two pages on facebook

For the whole wide world of English speakers out there, native and otherwise, I also have a Facebook page appropriately titled
top of the world cakes. Find me there, if you dare :)

And for those lucky few of you out there who understand Icelandic (I'm not joking there are only about 300.000 people in the whole Icelandic nation) I have an Icelandic Facebook page, just look for veislu kökur http://www.facebook.com/veislukokur

It can be nice to sit down with the people you love and share a moment.
It doesn't hurt if that moment is in the kitchen... or if there is baking involved.
One of the most celebrated Icelandic, family oriented, Christmas traditions (Try saying that ten times fast) is the annual gathering of the clan in the kitchen...
Preferably a grandmother is involved at this point to lead the proceedings.
Their mission... to cut out personal patterns in a very very thin piece of "bread" (it's a wafer thin piece of dough) and have it deep fried (by said grandmother) to be enjoyed at some point over the festivities.

It is a wonderful tradition which I urge everybody to try out... it's really not that difficult... Promise.
Given that this tradition is at least a few centuries old it isn't surprising to find out that there are very many variations of the recipe floating around (so don't worry if you find another one on some search engine or other.)
It originated in the "good old day's" when people didn't have much of anything here (everything had to be imported, for obvious reasons) But they wanted to make the Christmas celebration a festival of food none the less... What is a struggling, half starved housewife to do? Make Beautifully handcrafted flaky deep-fried bread of course... there's really nothing else for it.
It is a feast for the eyes and the taste buds.

The one I have here is a very simple, easy to make, no fuss, step by step, tried it myself kind of recommendation. 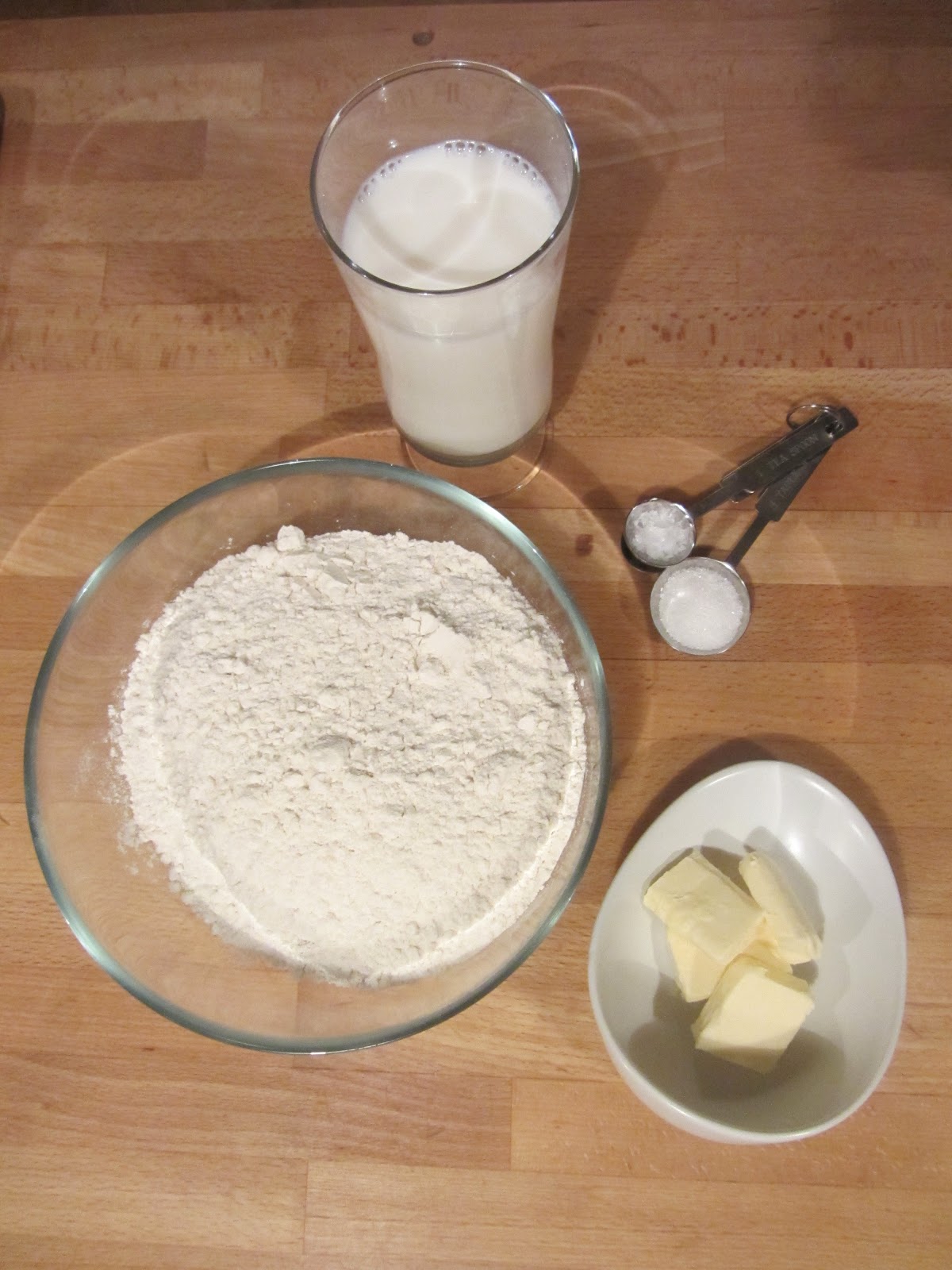 Oil to boil it in.

Heat the milk and melt the butter in it.
Mix the flower, the sugar and the salt together.
Add the milk.
Mix some more.
Dump it on the table.
If it looks like this... You did good. 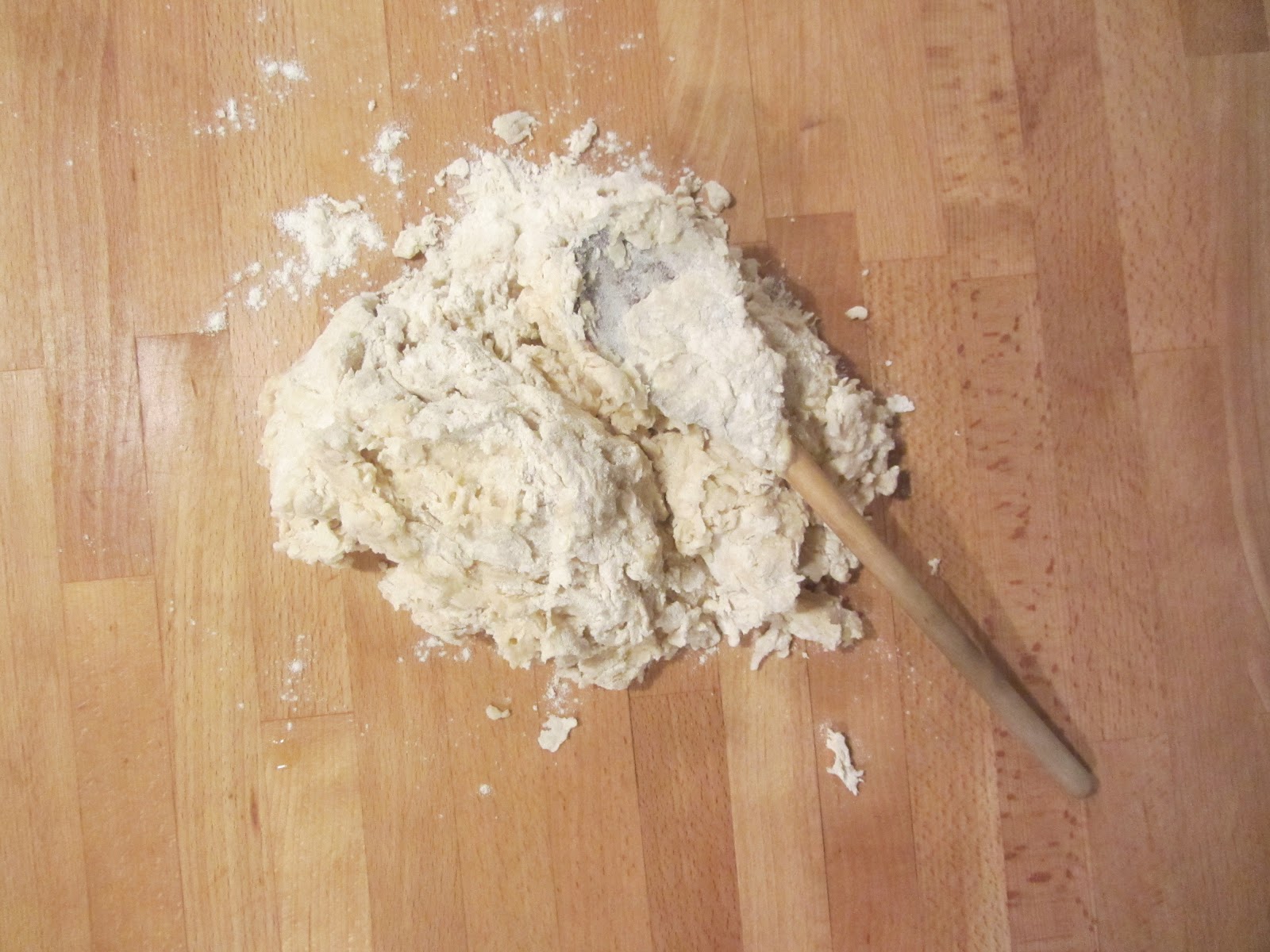 DON'T PANIC
Just knead it till it's nice and smooth.
It takes a few minutes, no more.
Don't add flower, just keep kneading it...
Then it should look like this... 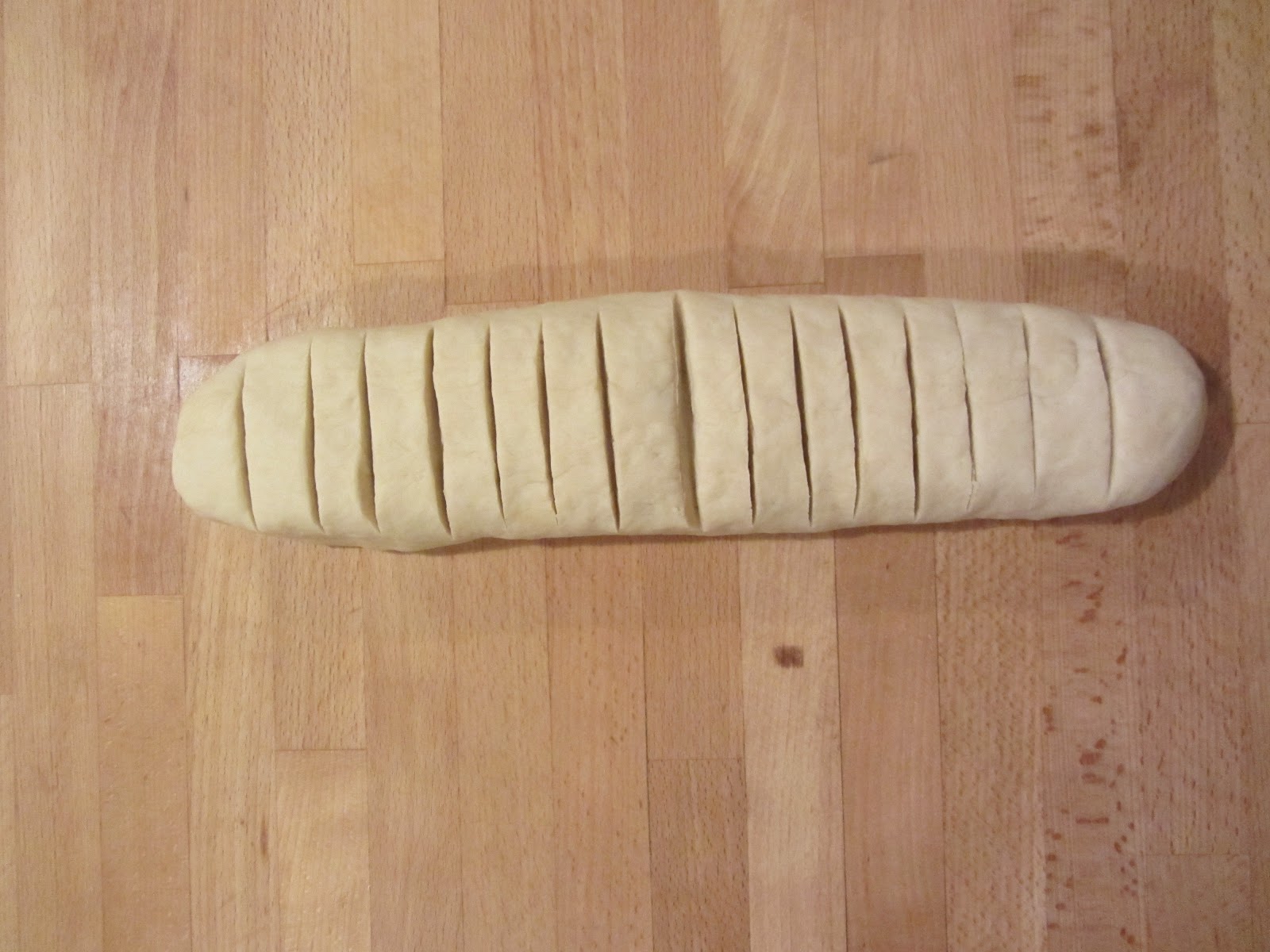 Obviously I added the nice stripes with a knife after I had formed it into a roll.
The stripes are not just pretty.
No.
That's actually the next step...
Divide the dough up into 16 "equal" pieces...
Don't cut all the way through, just mark it for now.
Dampen a clean cloth (tea towel for example) and place over the dough so it doesn't dry out while you work each little piece.
Take one piece at a time and roll it out flat...
Like so... 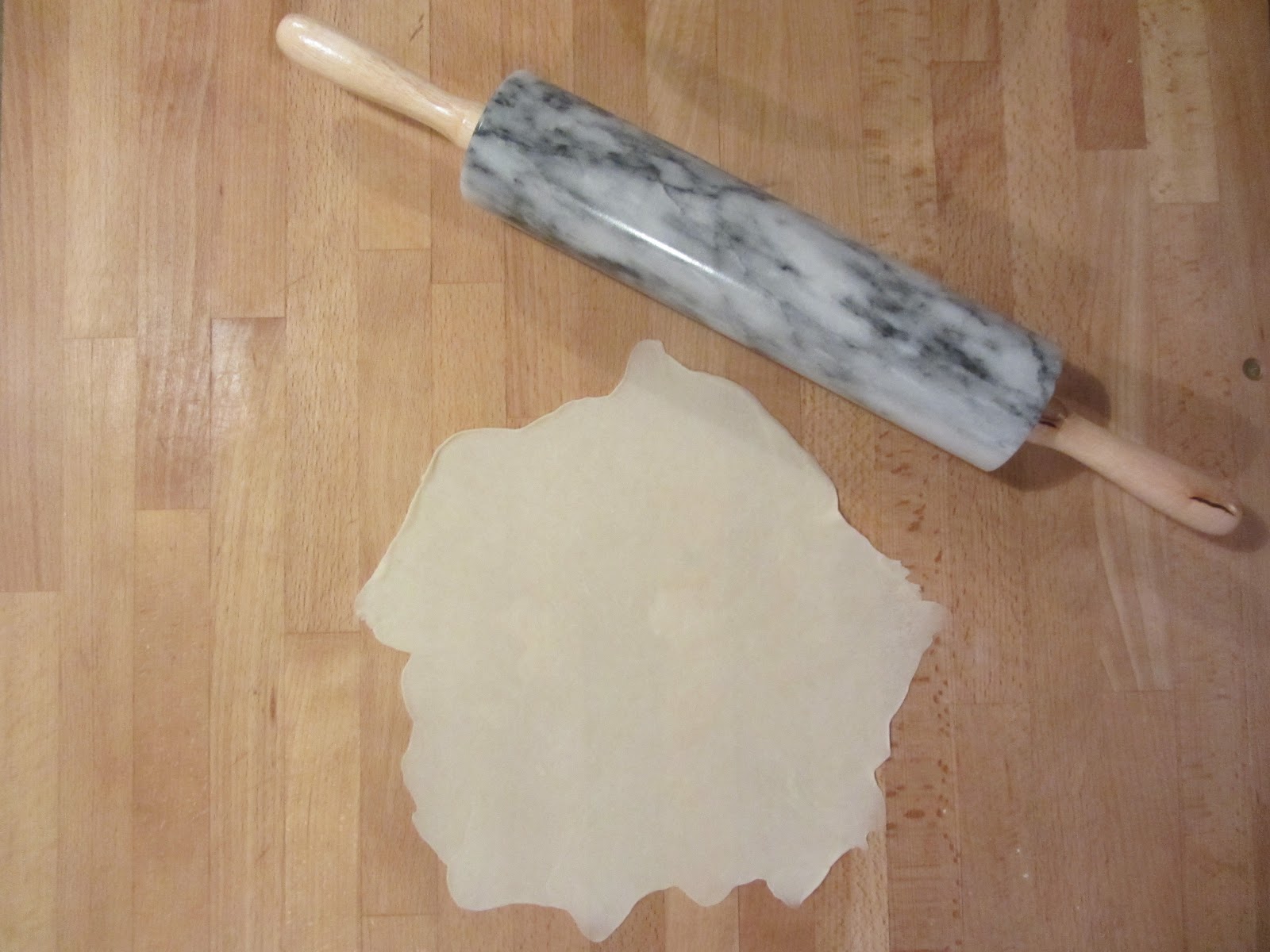 According to tradition it is supposed to be so thin that you should be able to read the newspaper through it.
Don't worry about the shape, it's unavoidable (unless you're grandma)
This is how we make it nice and round. 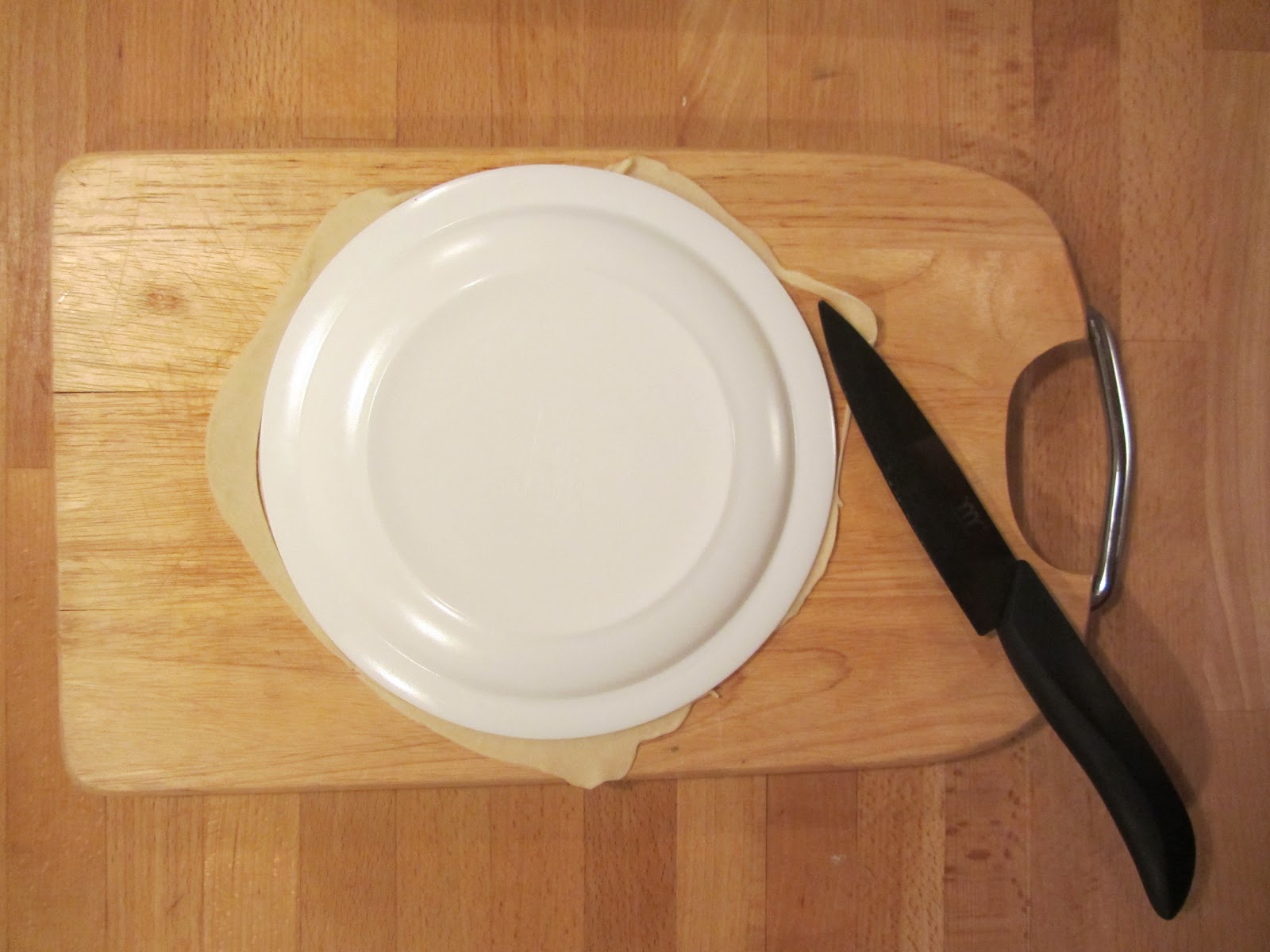 Yes it's that simple.
I would have used a lid from one of my pots but it wasn't big enough.
You want to use a nice medium sized plate to get the dough big enough to make your design on it but small enough to fit into a frying pan / pot.
Don't throw the cut-offs away, just gather them in a bowl somewhere nice and quiet, you will want them later. 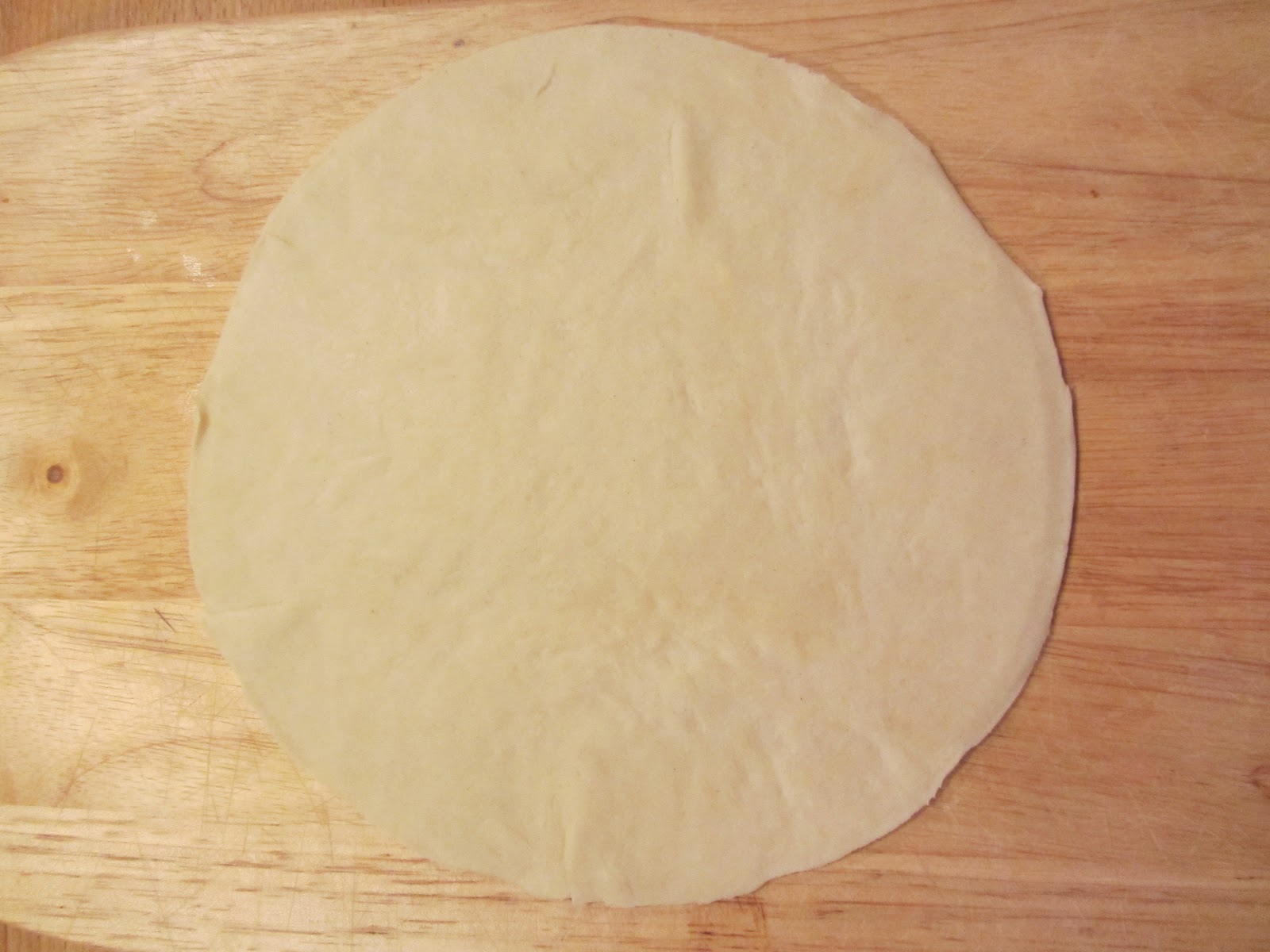 Now...
Rolling them out and cutting into shape is really 80% of the work, this can be done by one person who generously offers him or herself up for the job, or if you want to do it beforehand, just make sure you store the dough carefully so that it doesn't dry out.
I make a pile.. ready to be used as soon as the rolling is complete.
I dampen another cloth, cover it with a sheet of baking paper.
Then put one flattened out piece of bread on the baking paper and another piece of paper on top, then repeat. Layering bread / paper / bread /paper on top of the damp cloth which prevents it from drying out.
Ok then the next step.
Cutting your individual design out in the bread.
THERE IS NO WRONG WAY TO DO THIS
But here are some, easy to make, traditional patterns.
All you need is a sharp knife.

Step one
Fold in half... Step two
Groovy,
Cut some grooves into it at an angle (not angel, angle.)
Simple... 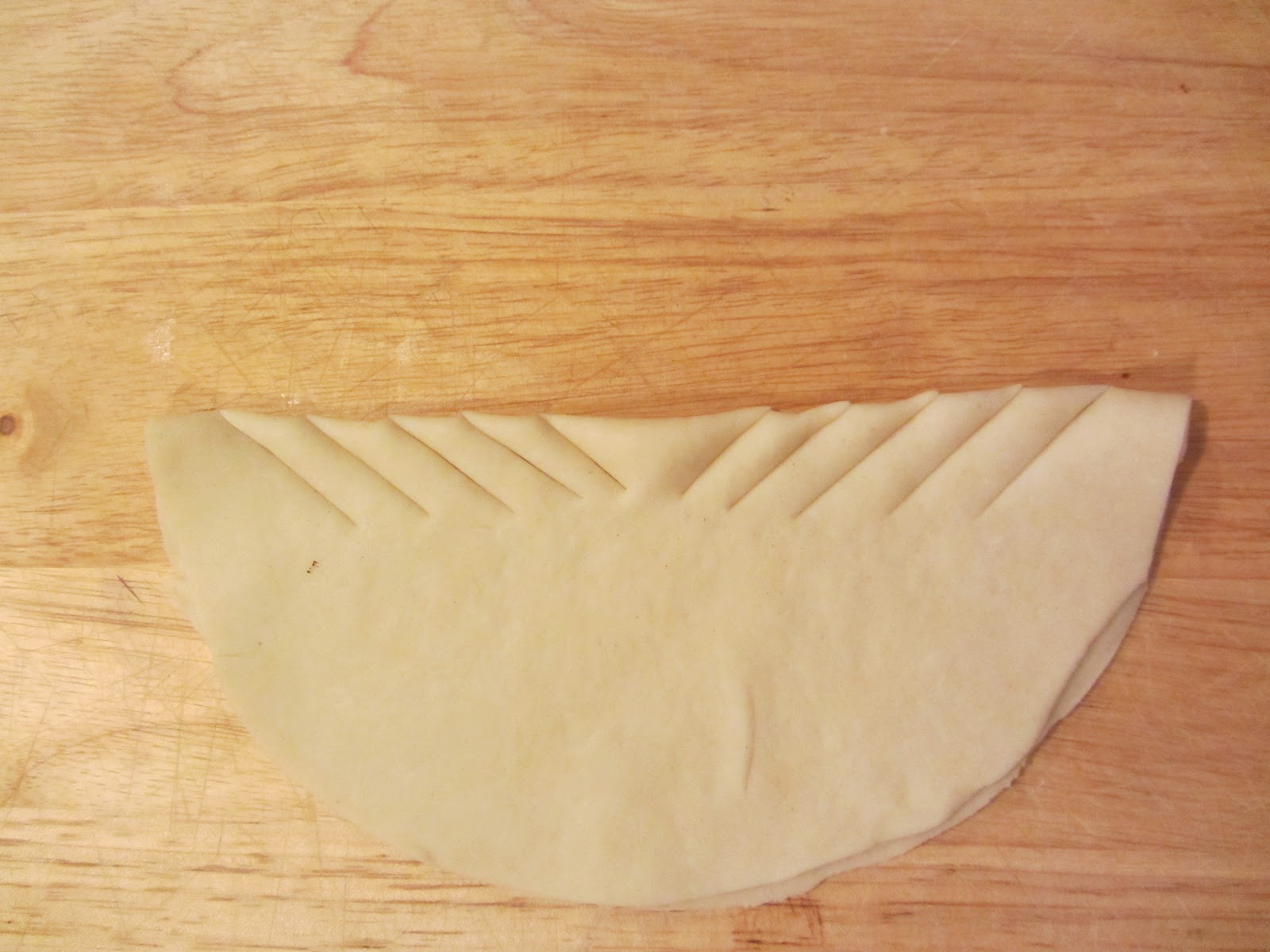 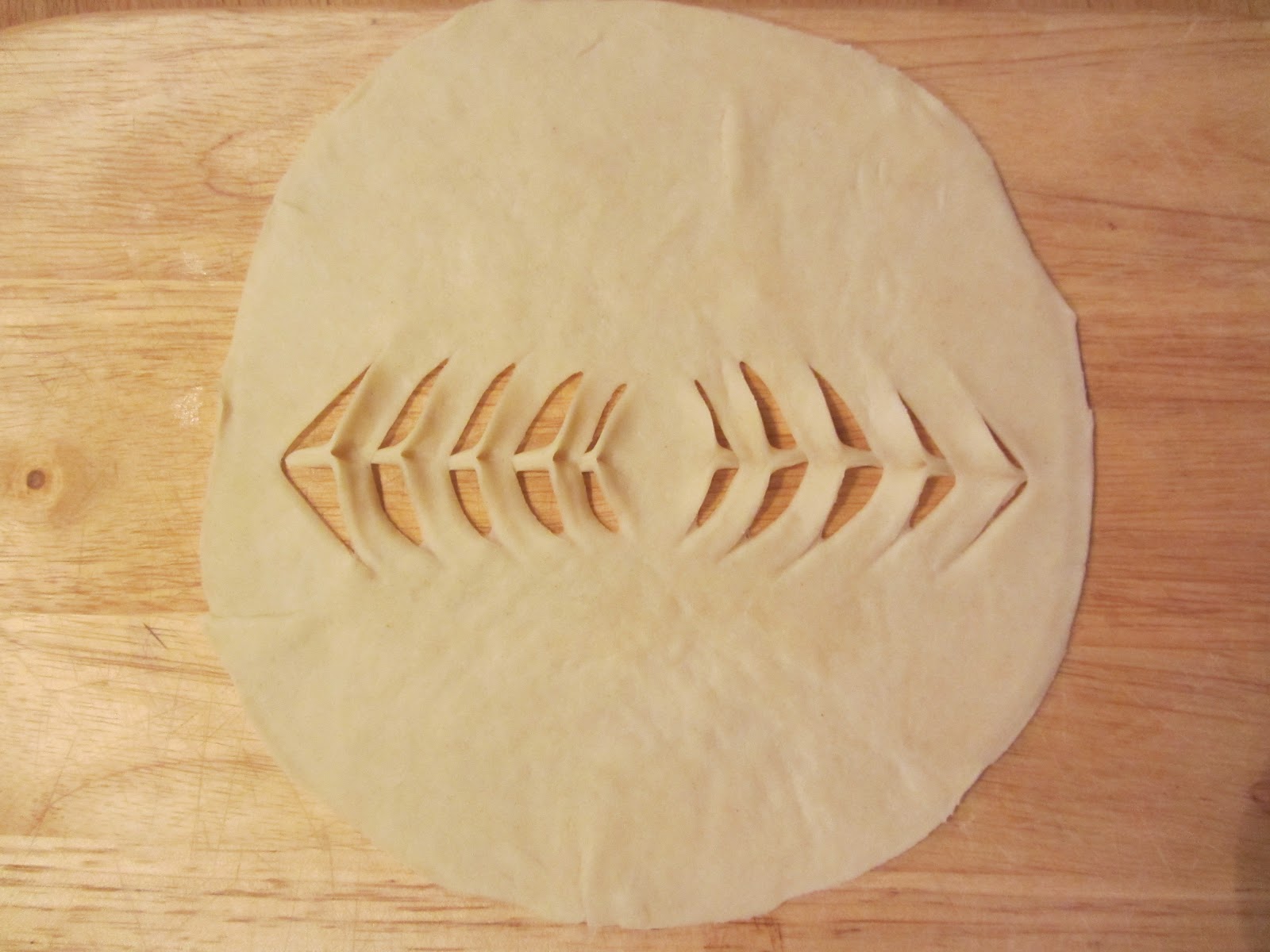 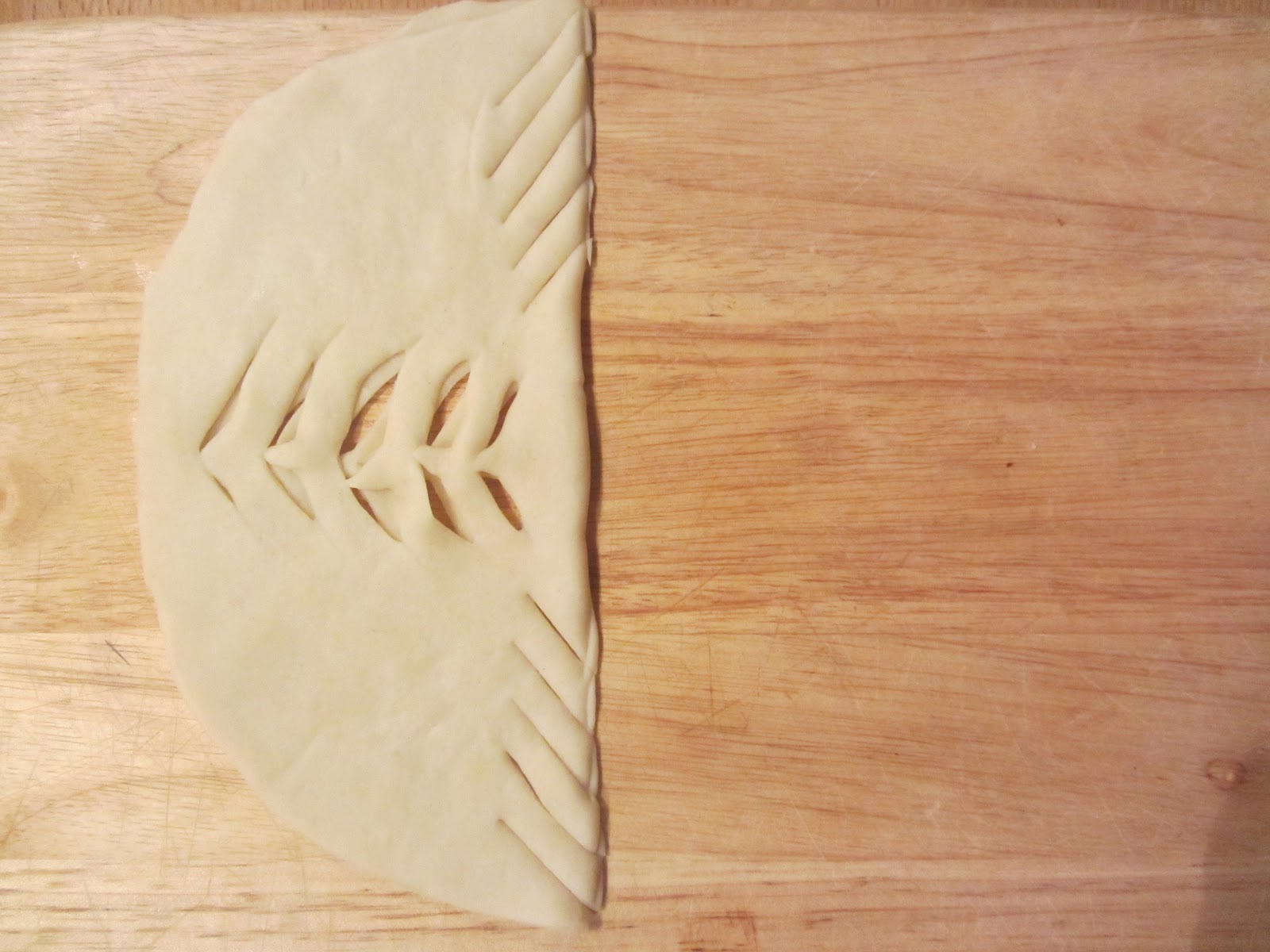 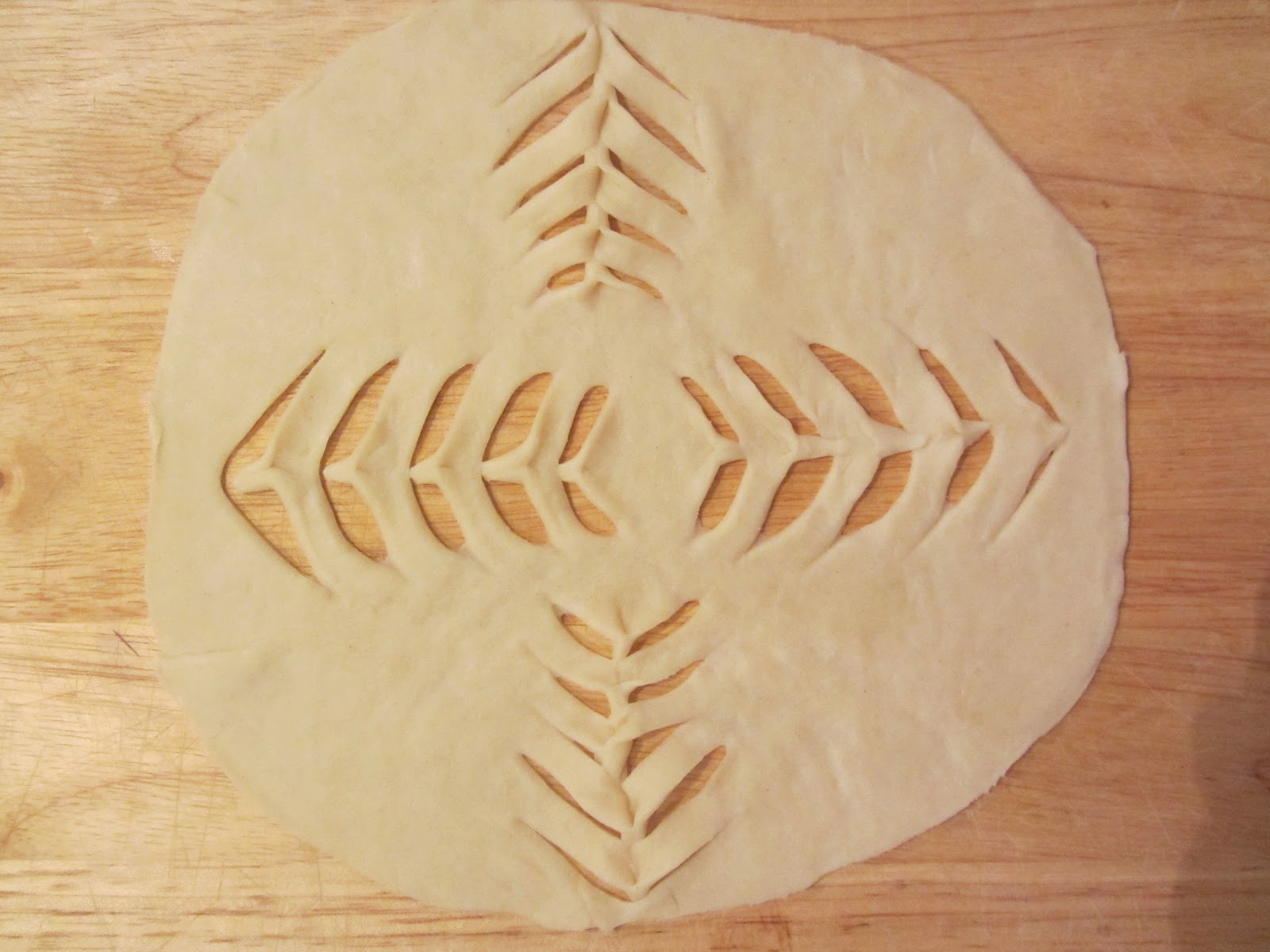 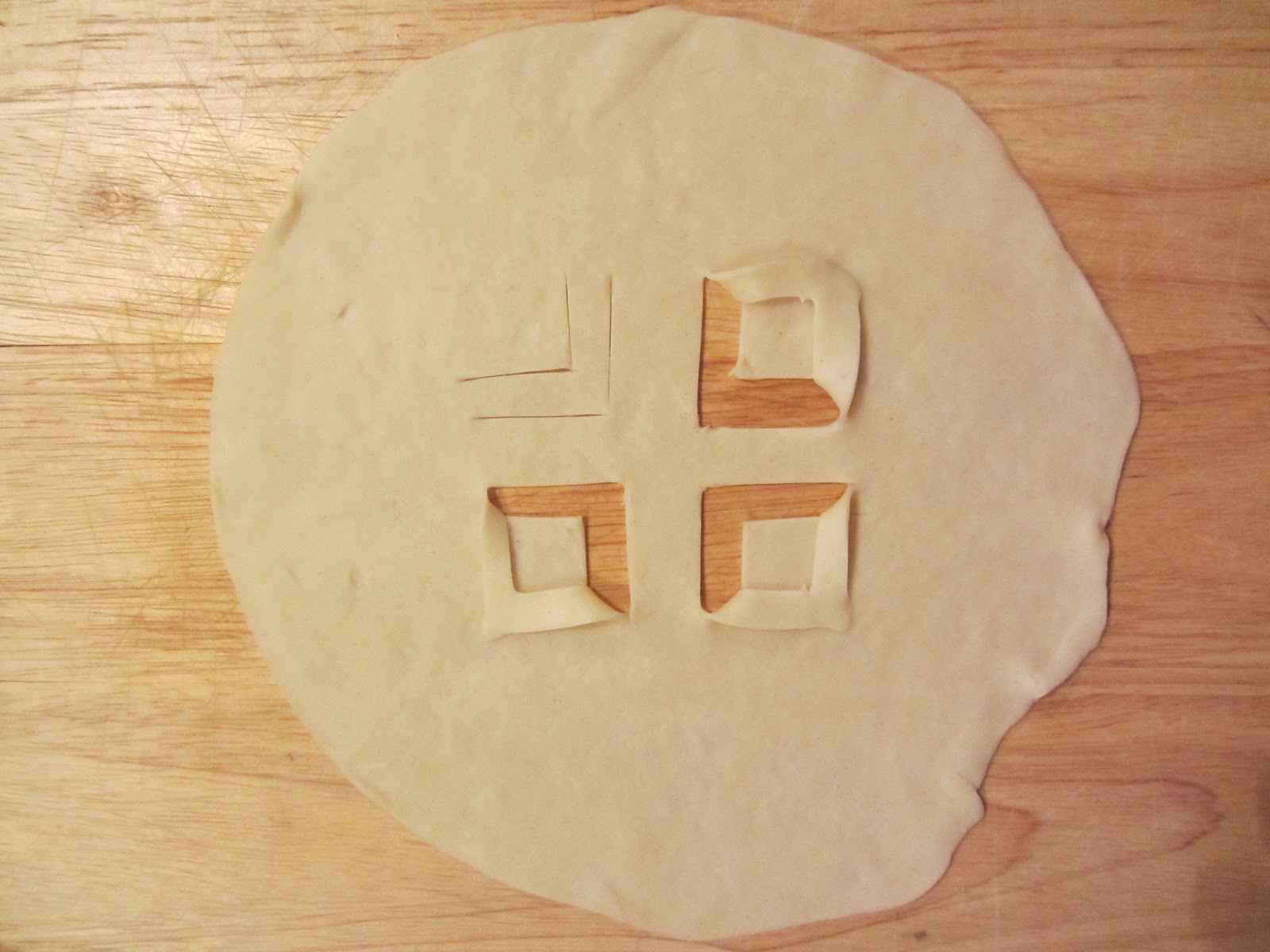 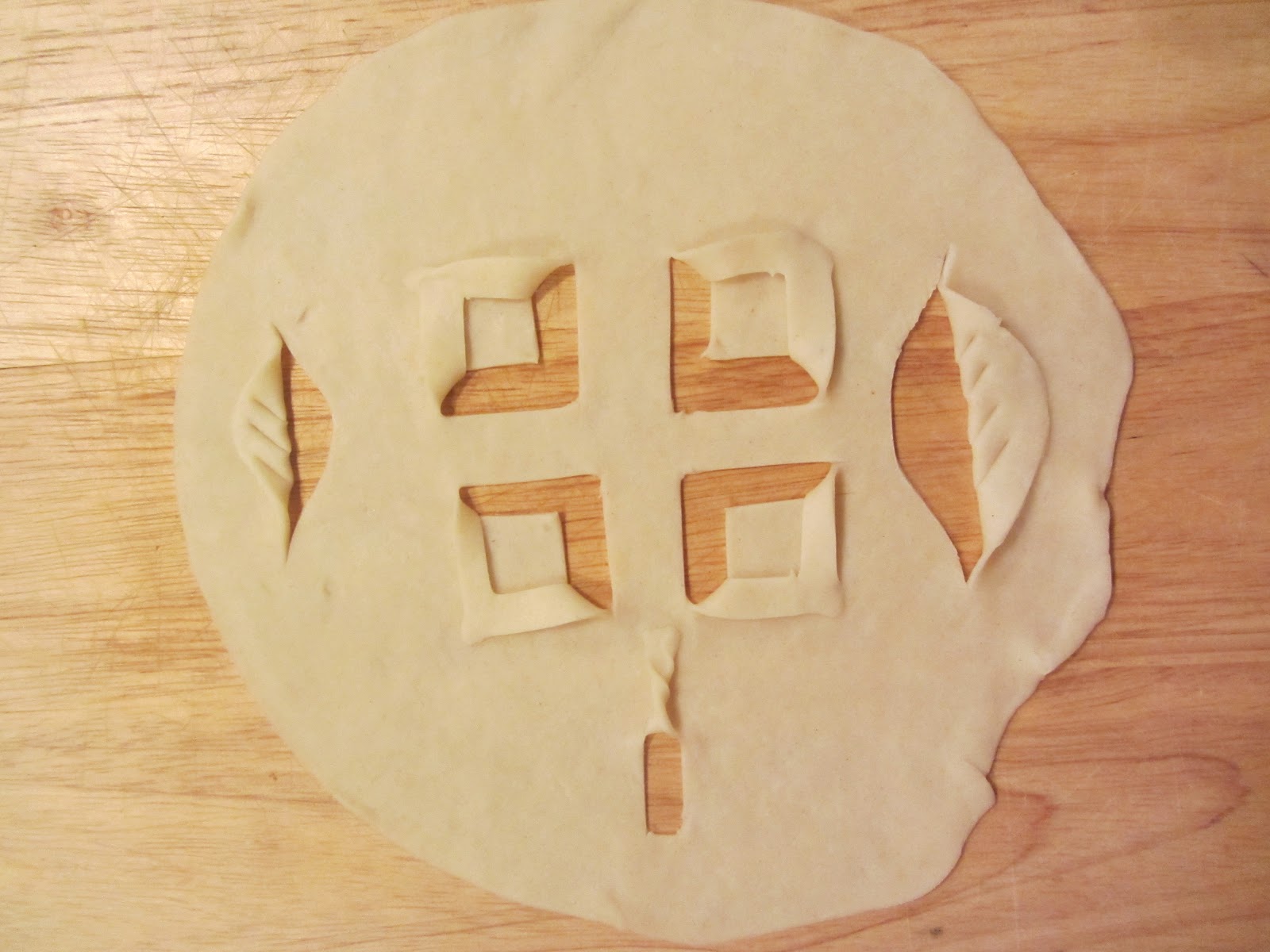 But honestly... you just let that knife dance on that little pre-cooked pancake.
Like so... 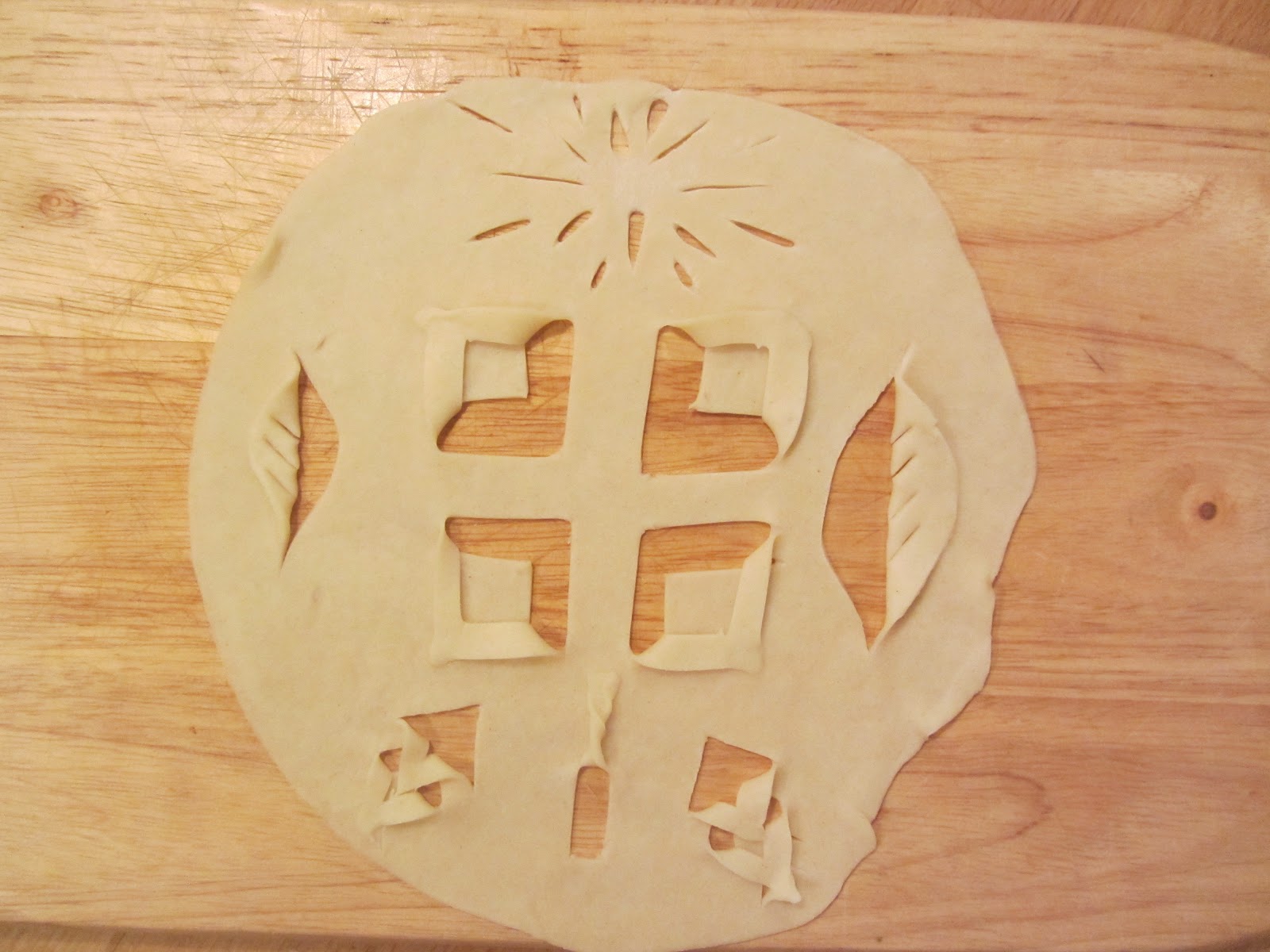 See the little triangles on the bottom... that's the pattern I was talking about above in step three.

Right...
Next...
You will of course be storing these little beauties after you make little masterpieces on them in much the same way as you did the per-decorated pieces. (baking paper and cake layering on a damp towel)
Then...
You need to heat some vegetable oil.
Really hot.
I don't know what temperature is best... not in degrees anyway...
I use the good old, time tested, traditional way of throwing in some cut-offs and waiting to see of they fry up nice and brown. 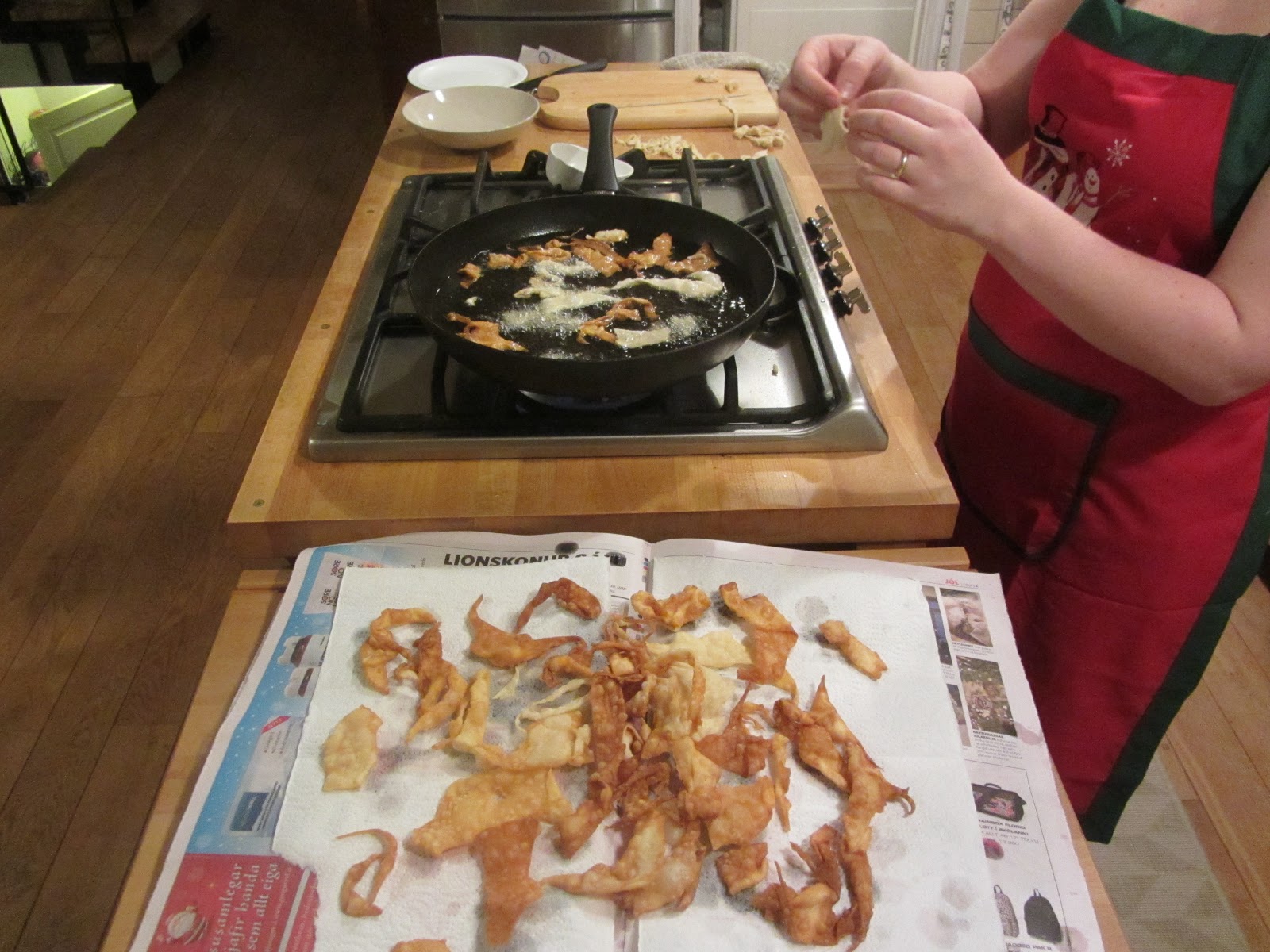 Then, while the oil is getting up and running... you are trying out the best way to add the cut-offs and remove them and finding out just how to work a scalding hot pan full of boiling oil. 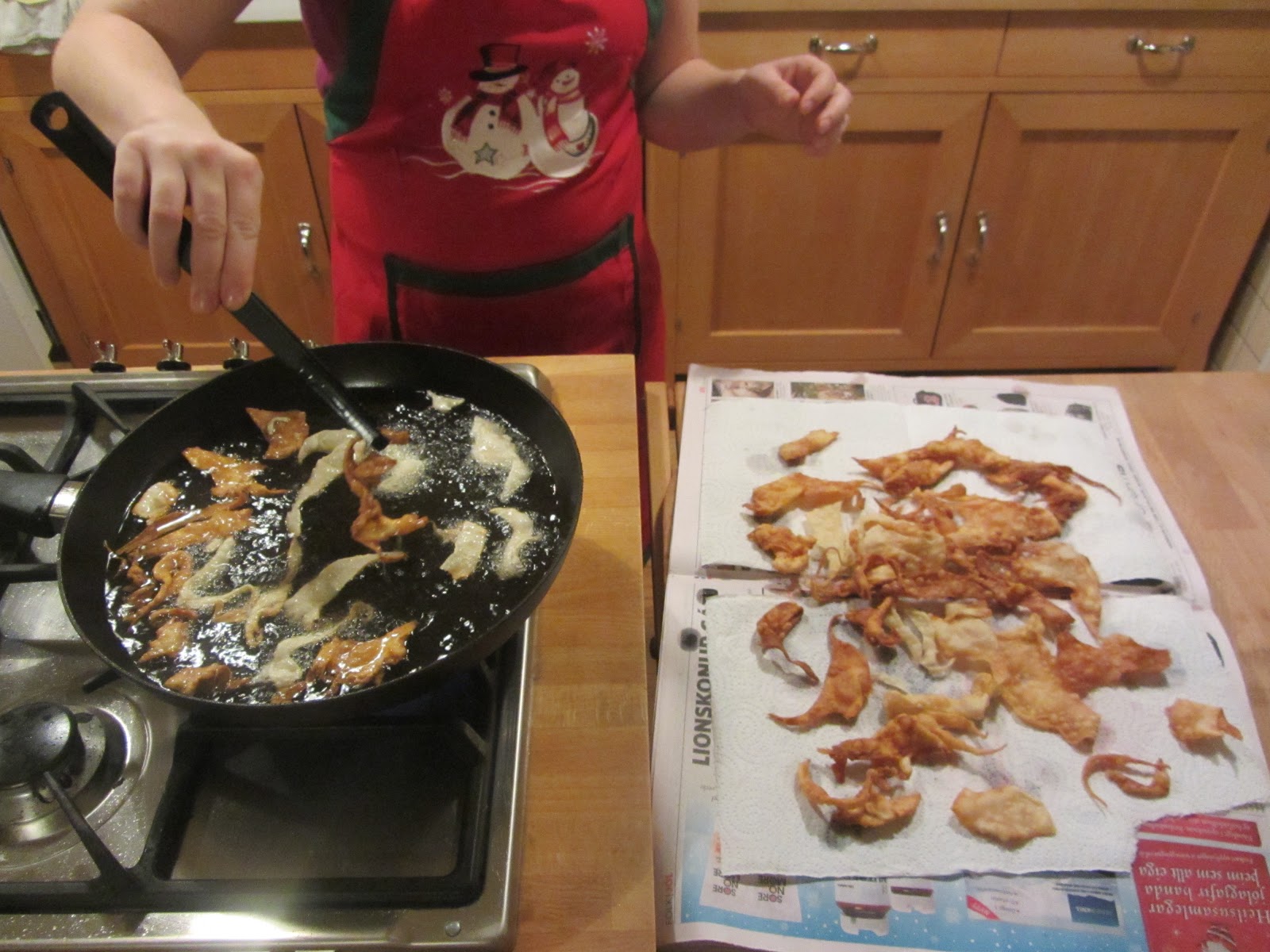 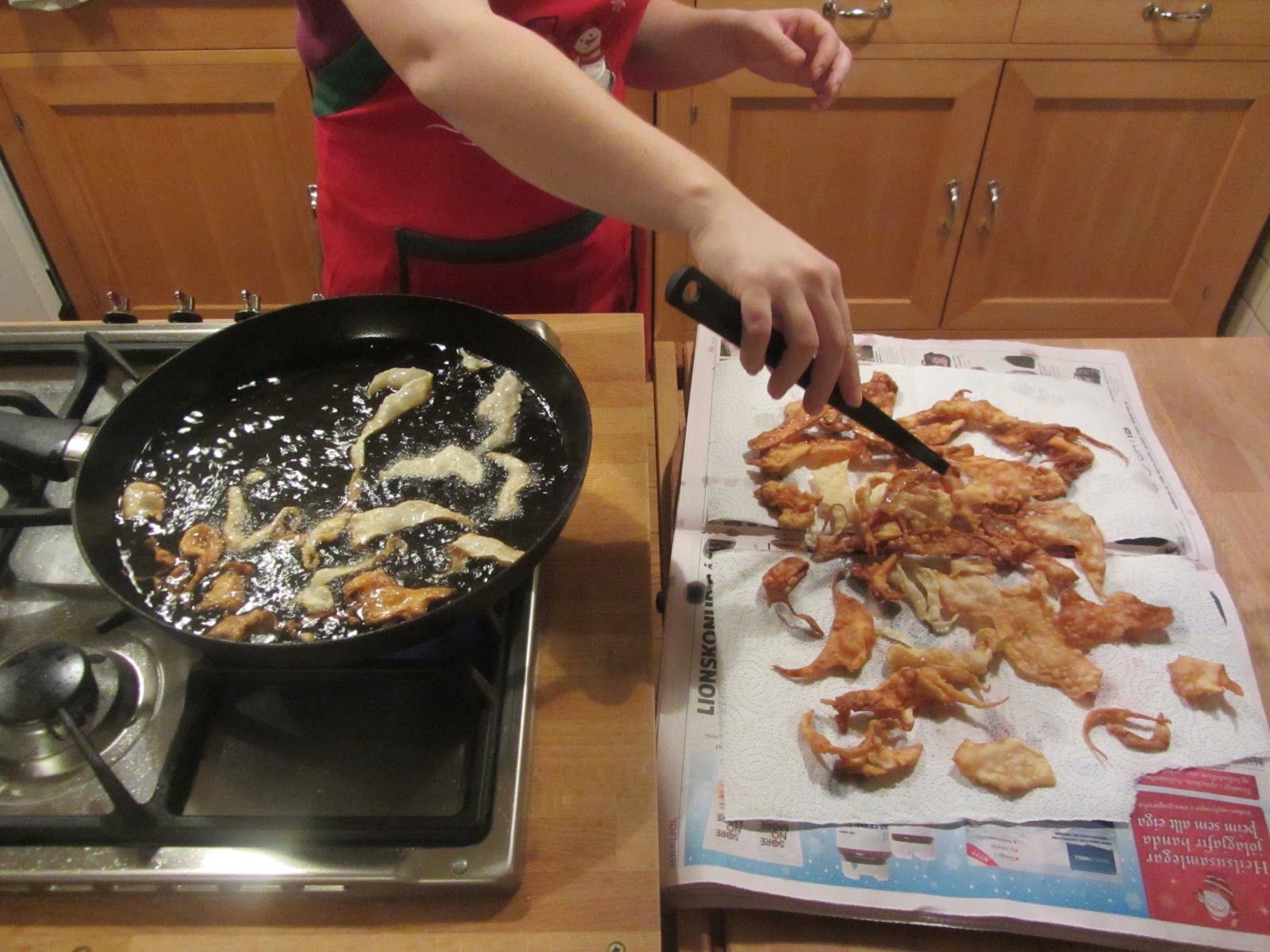 Anyhoo...
Add a piece of bread to the oil when you run out of cut-offs.
Pattern side down. 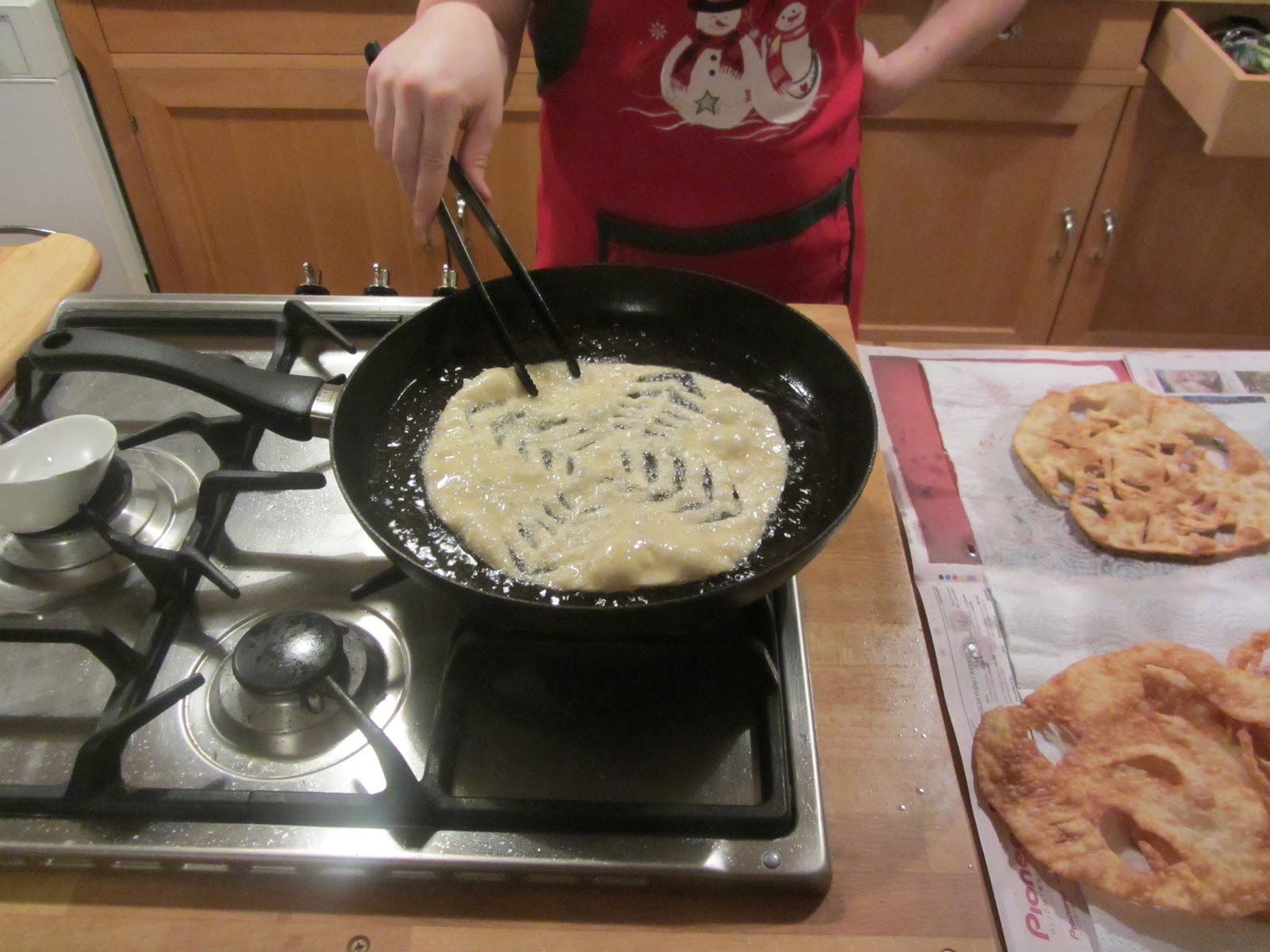 Look at me posing in my Christmas apron.
Now you will want the bread to get that nice golden-brown color so leave it for a little while on each side.
Be EXTRA careful when you flip it over. 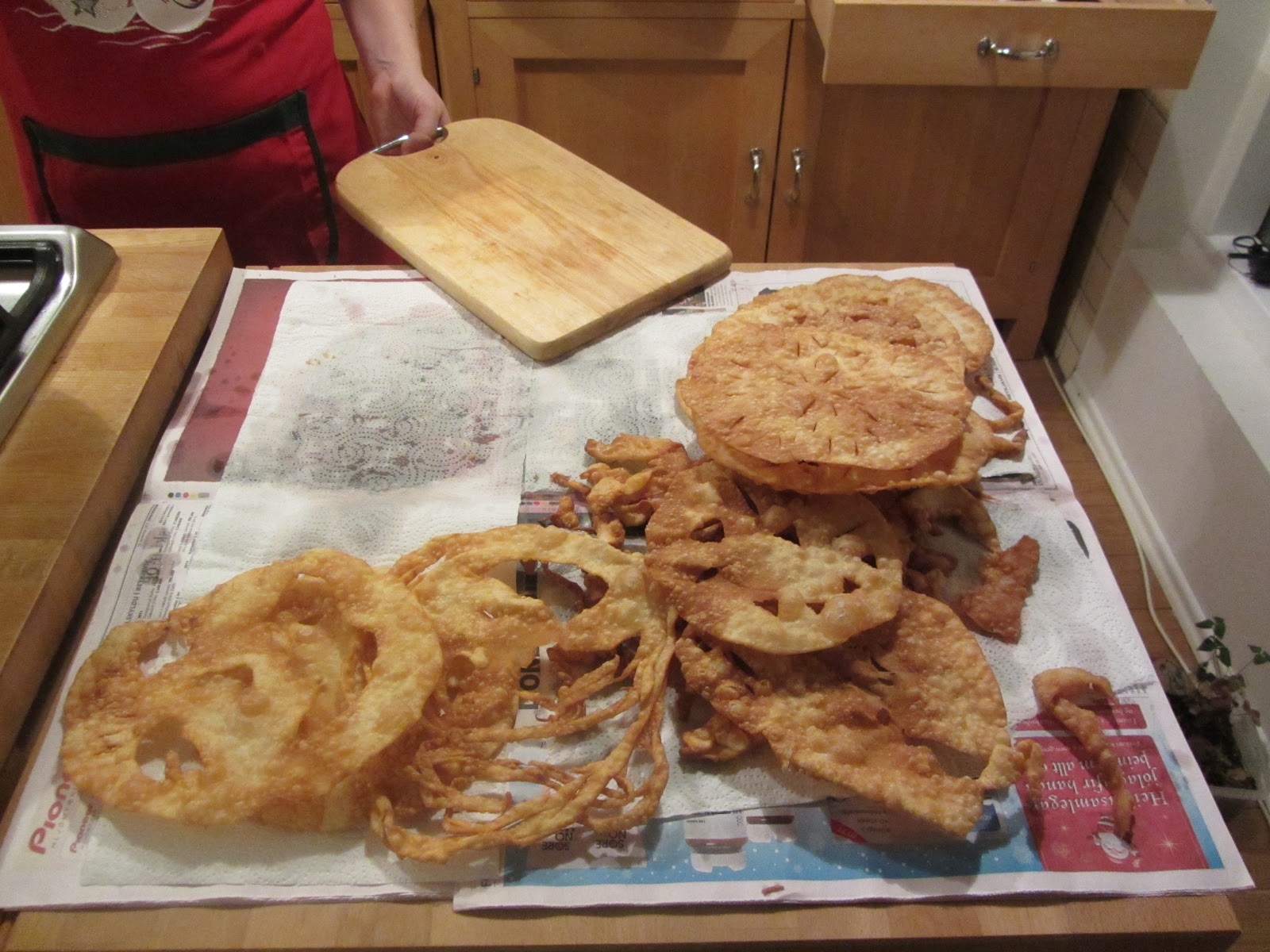 When it's done place it on a paper towel and cover it with a board for a few seconds pressing down. That way they will at least be moderately flat later on when you attempt to stack them up for storage.

Here are some I made earlier
The window... 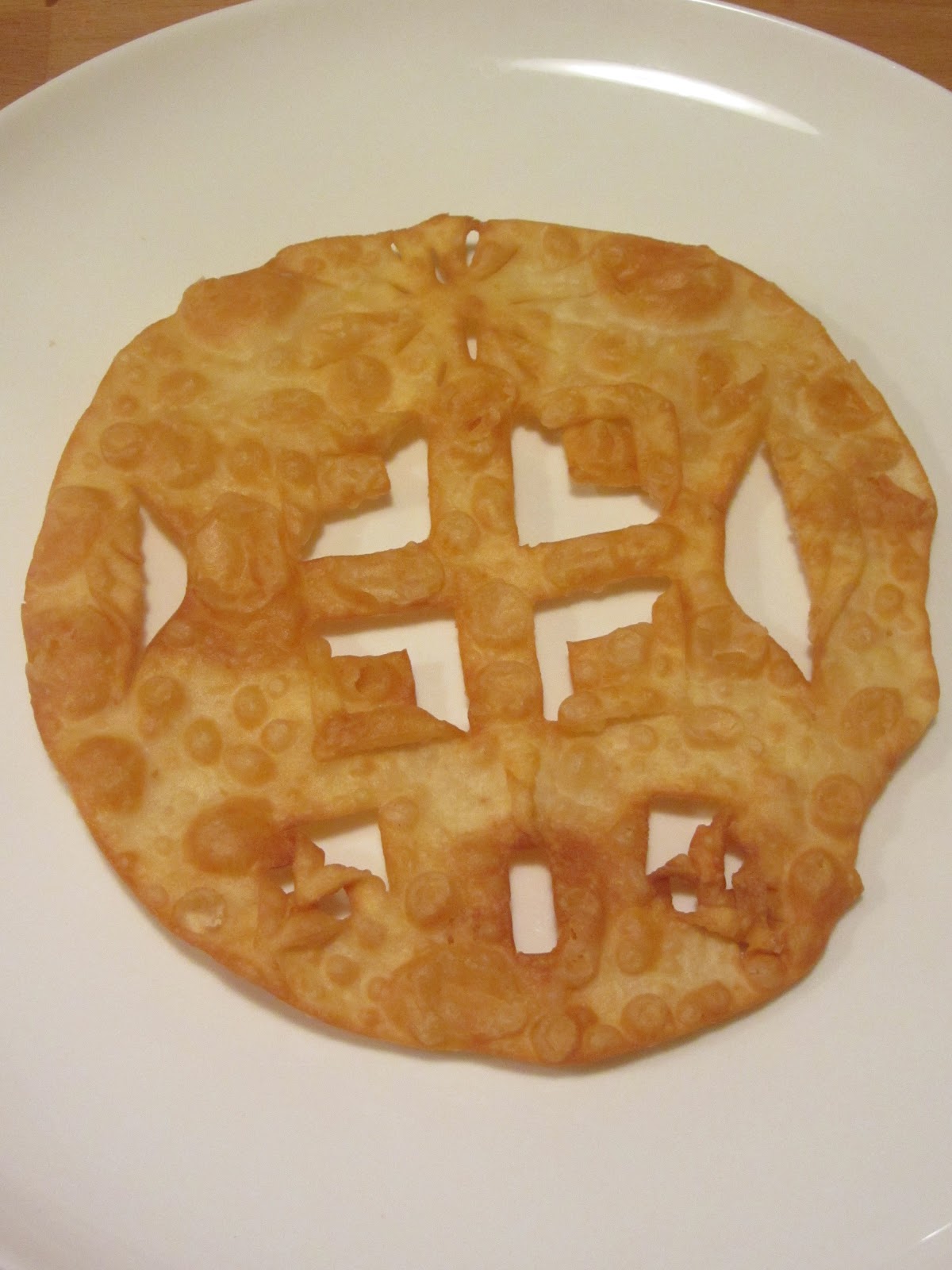 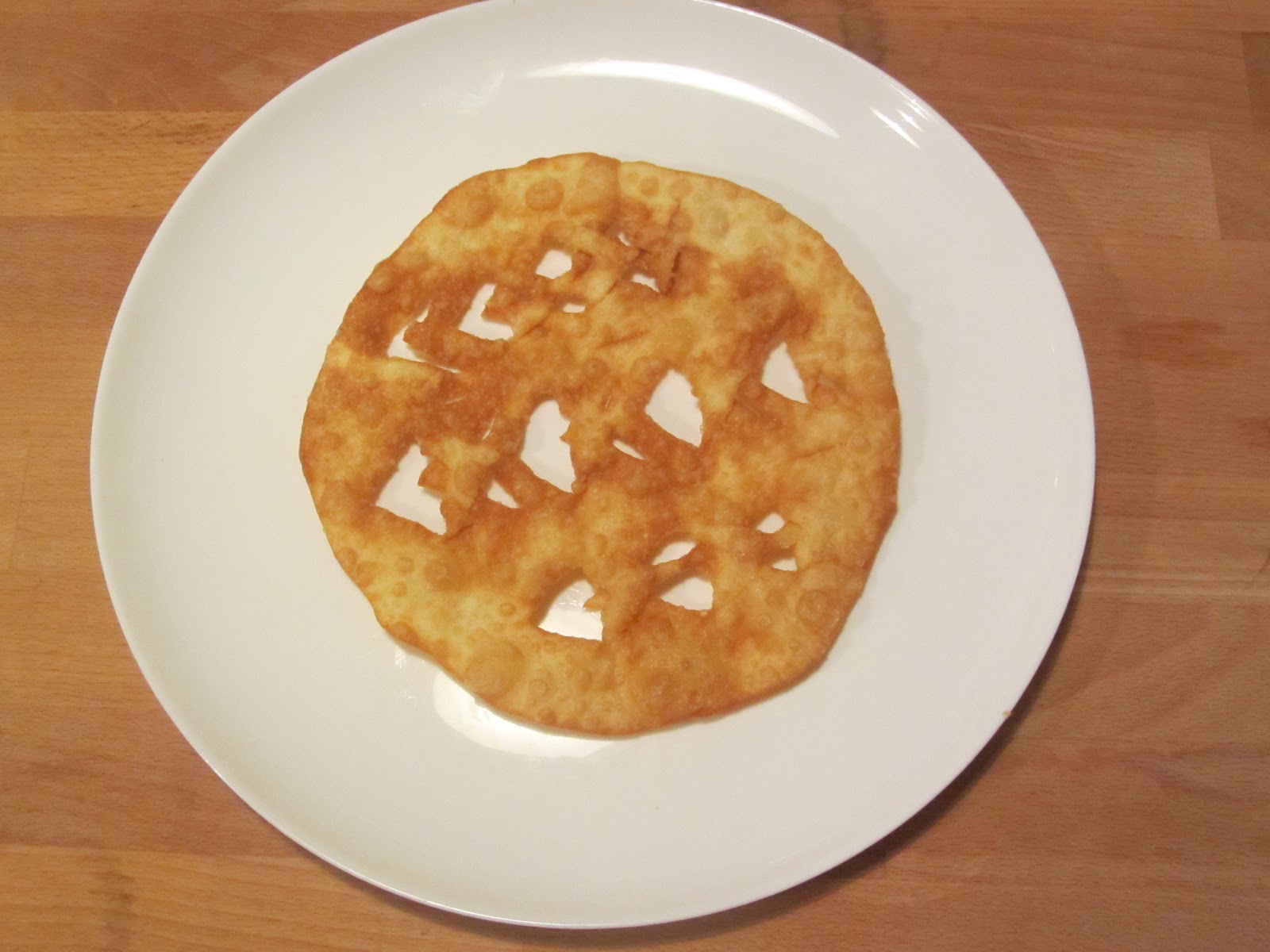 The One, Two, Three Steps from above... 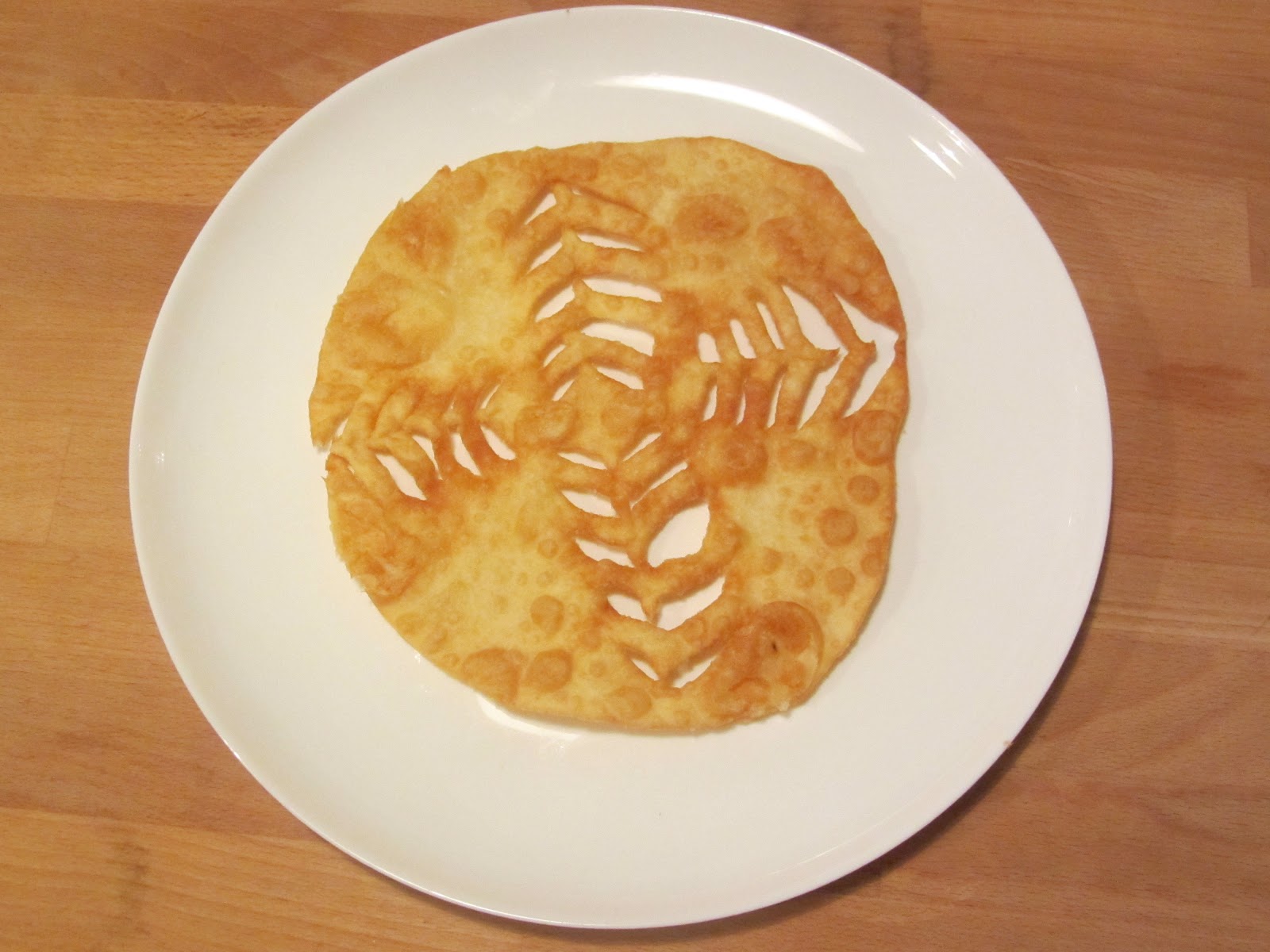 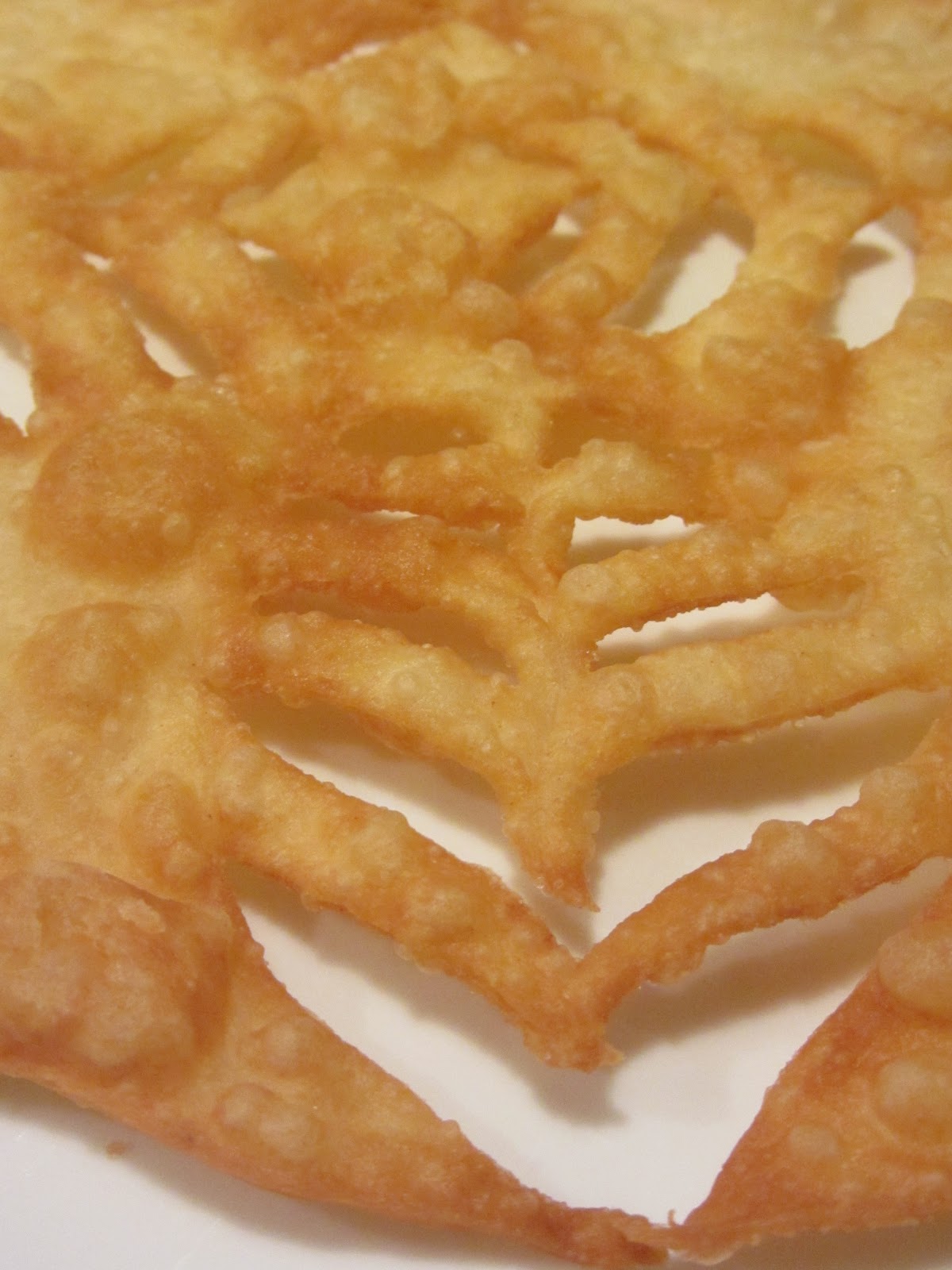 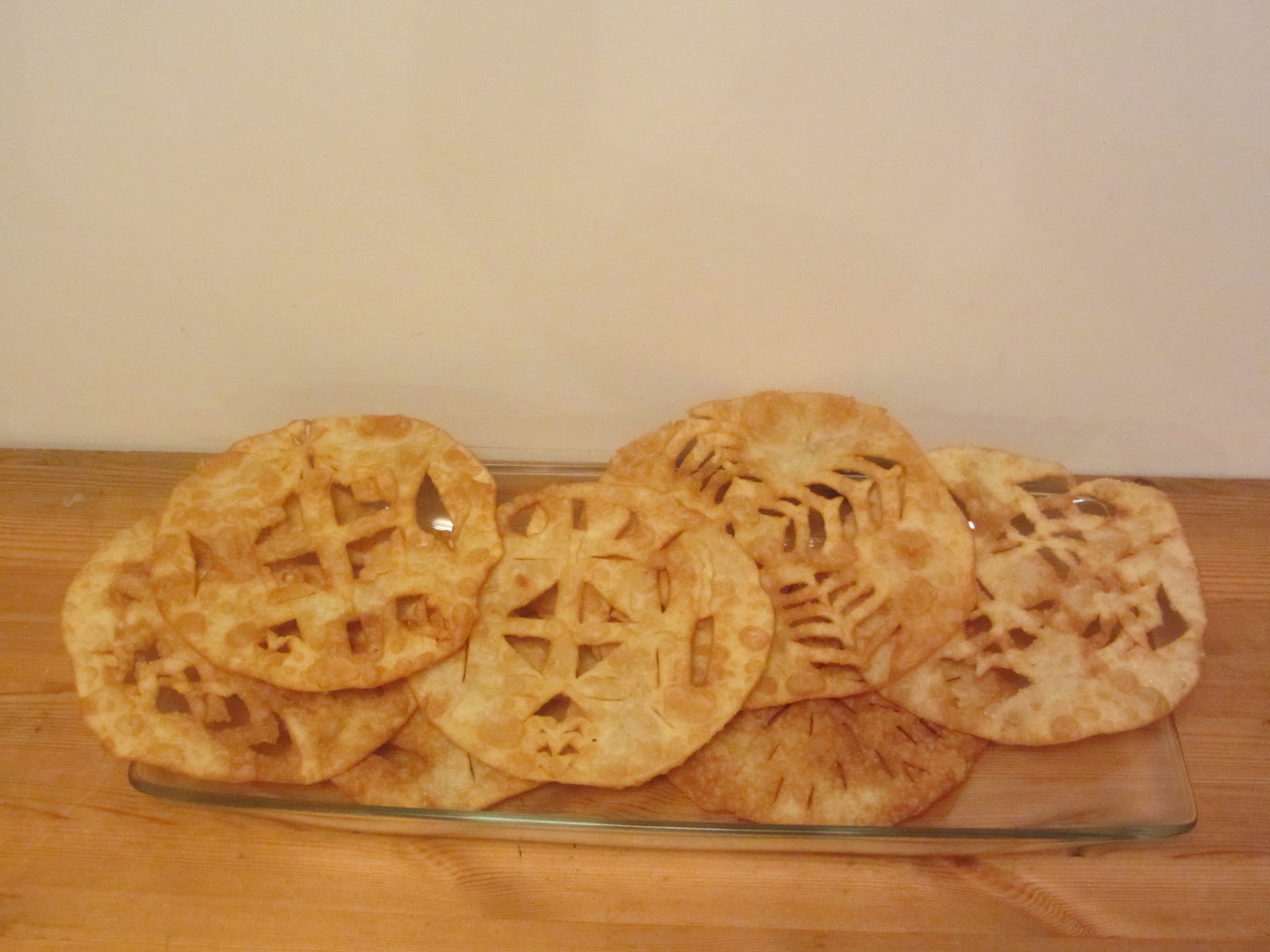 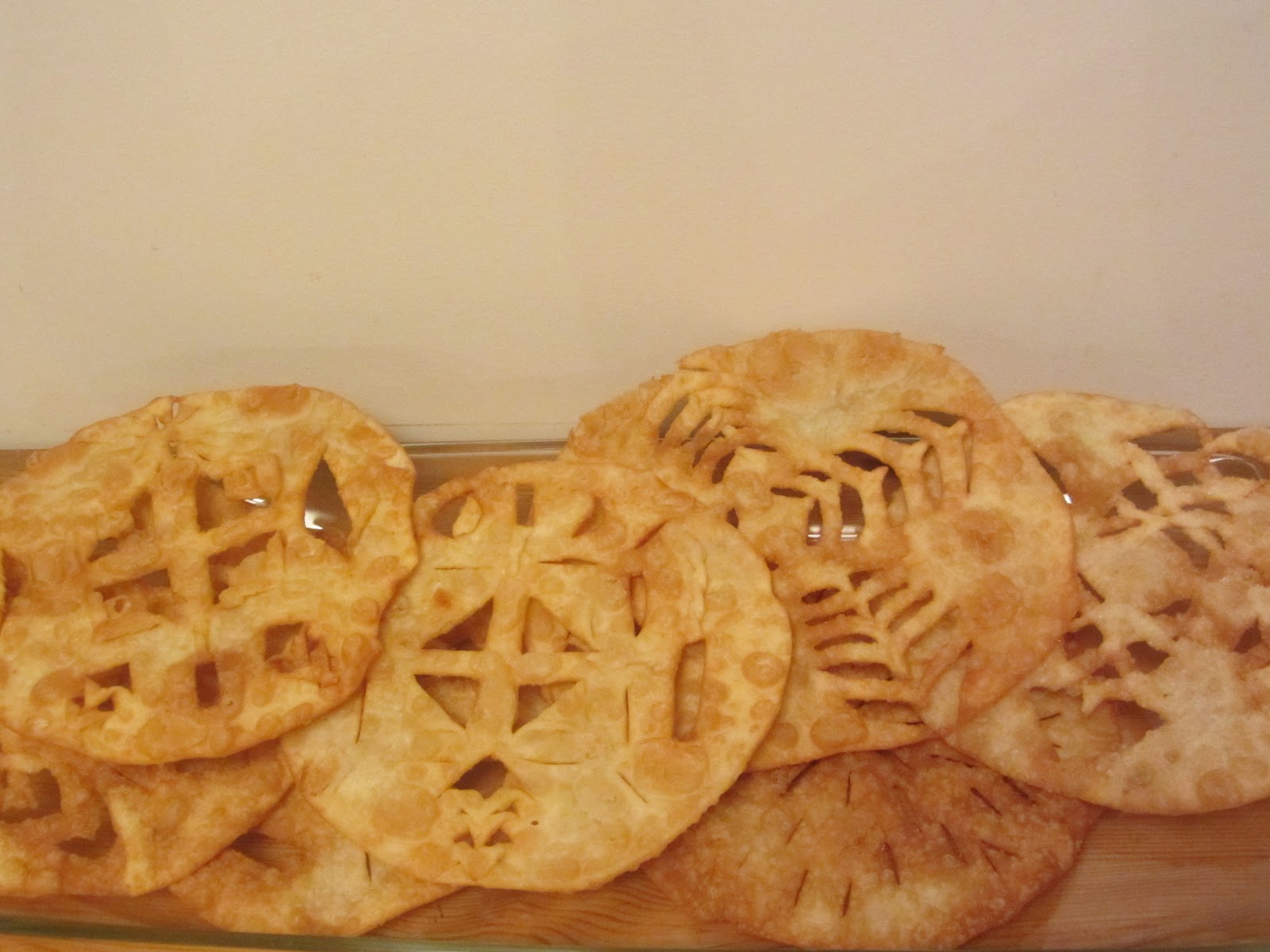 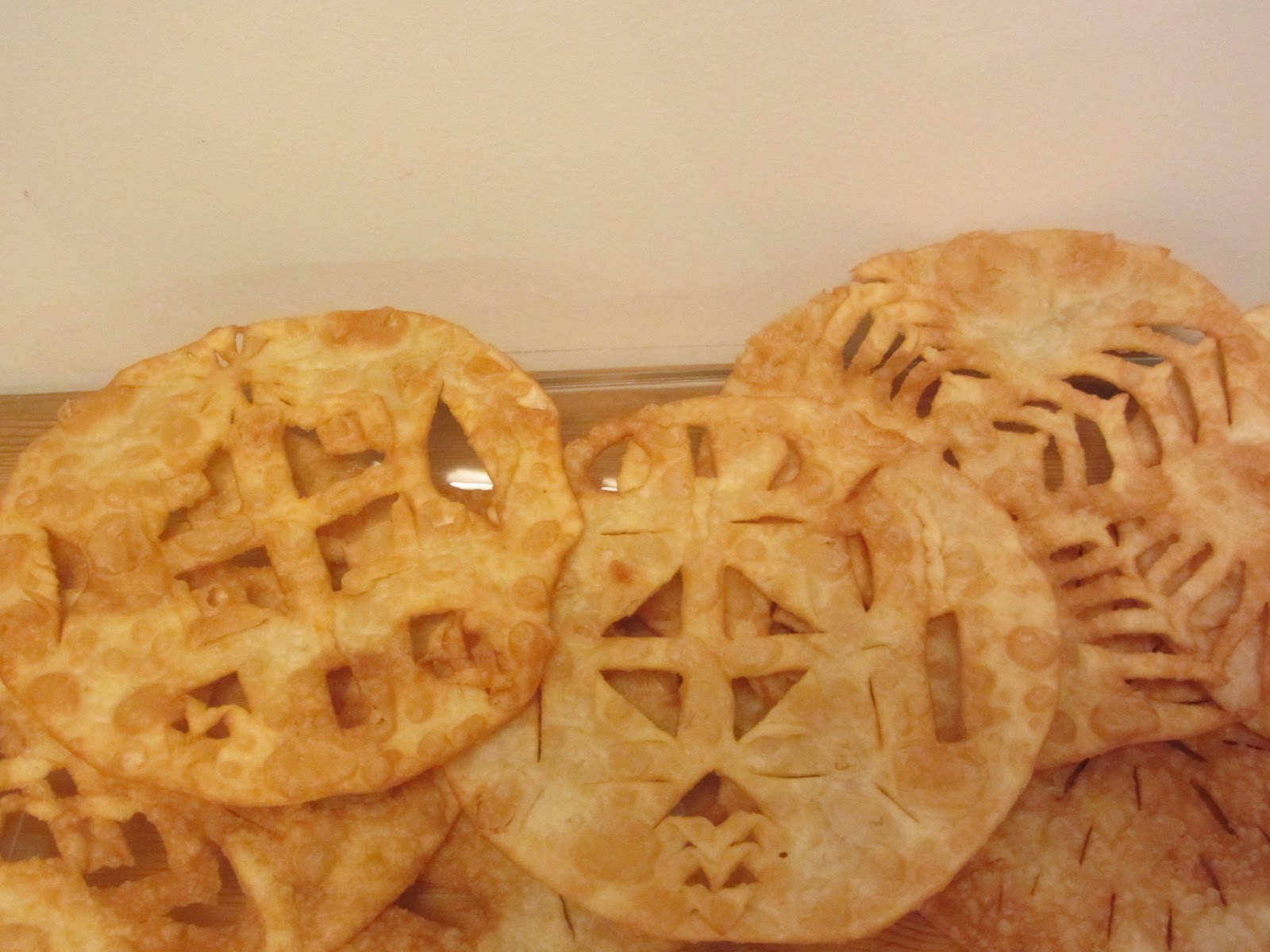 Now these will keep nice and tasty in a pile covered by a plastic bag for at least 14 days... but they usually don't last that long.
Everyone should have a taste of the cut-offs, they are the first to go... 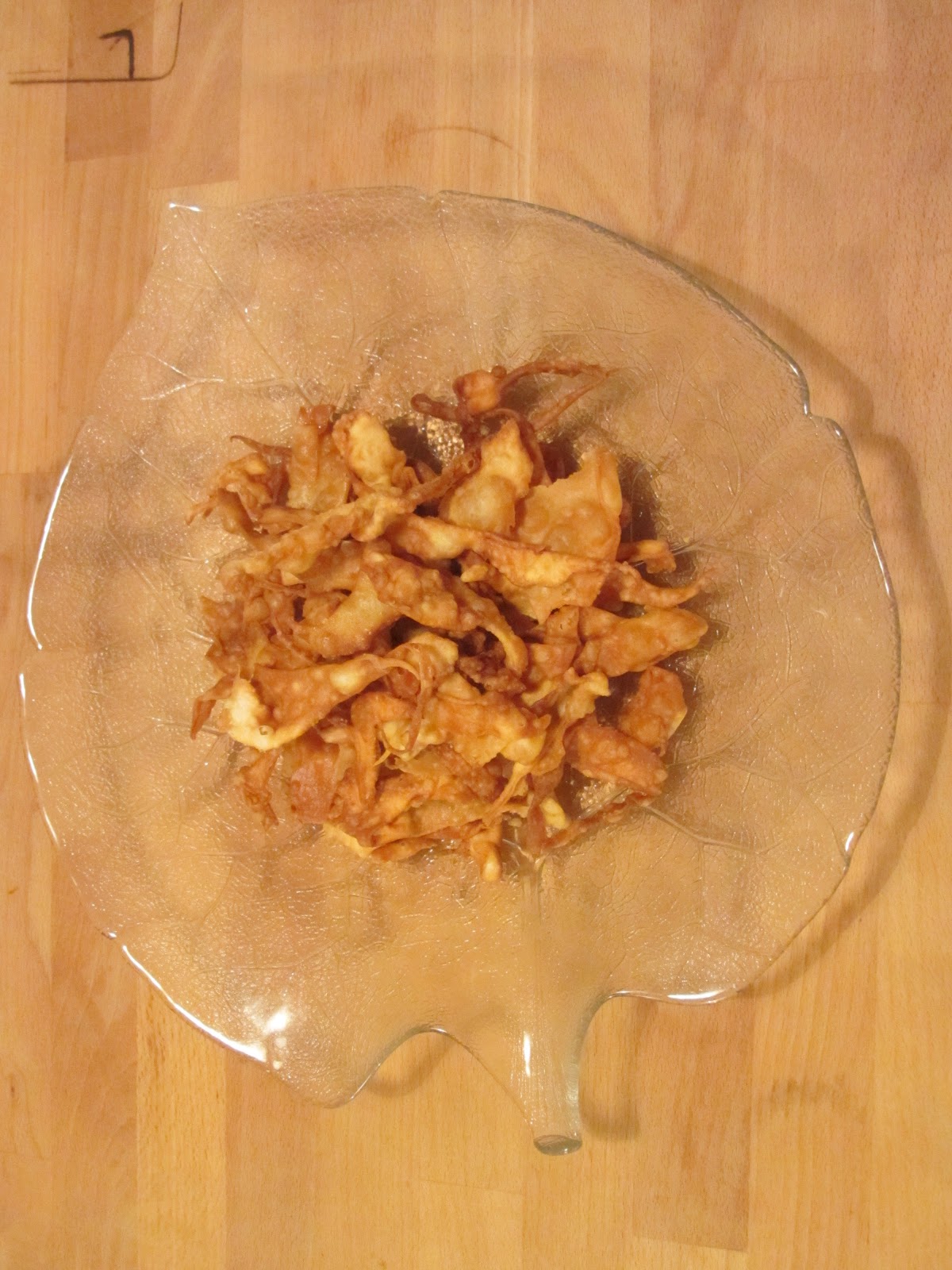 Add a generous helping of butter, something nice and salty.
The kid's really love this. 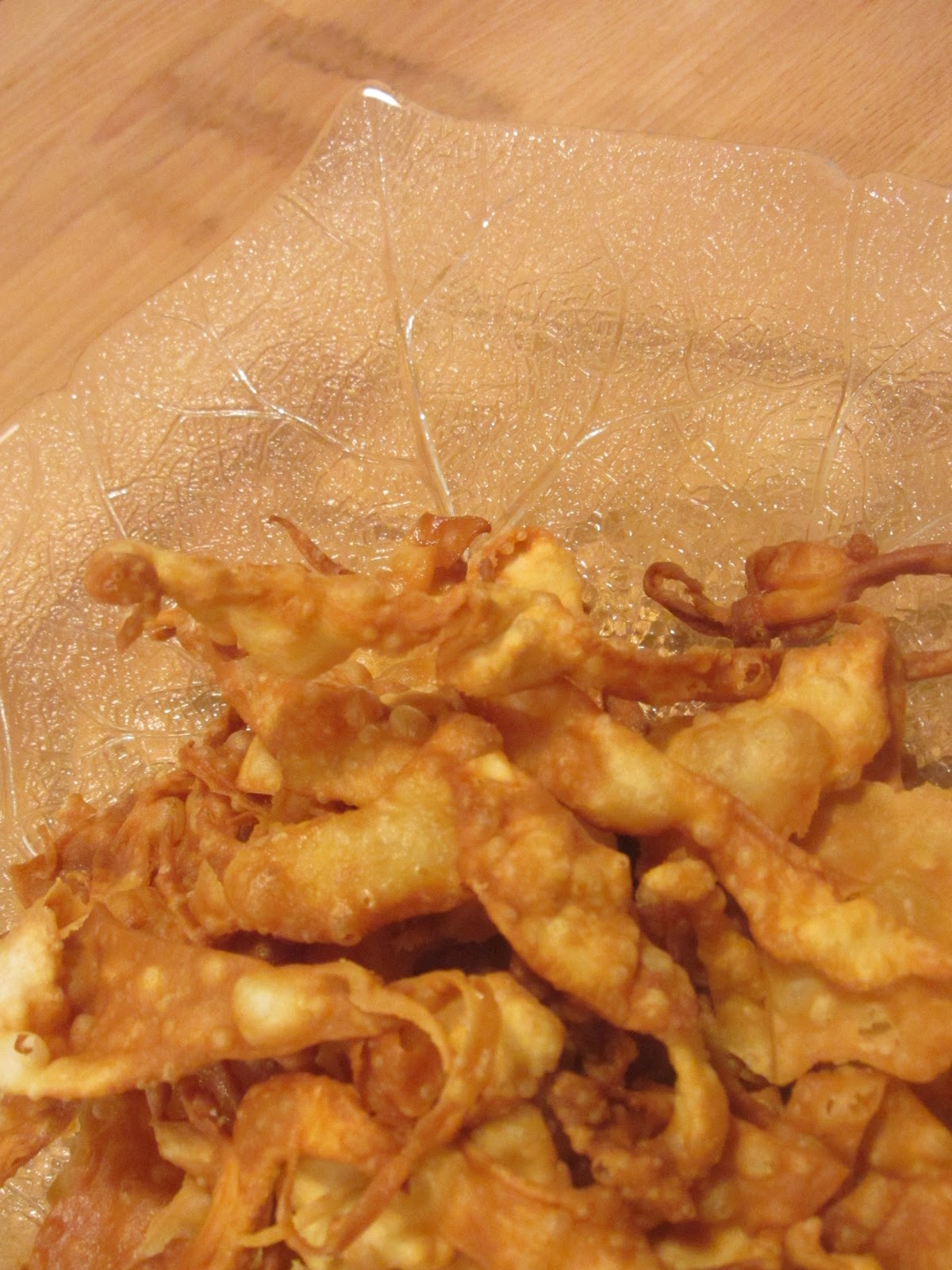 It has a golden look to it,
A feel-good taste to it,
And you have a family friendly time making it.

And like I said, you can't really mess it up...
It all end's up in the frying pan anyway and get's deformed,
or re-formed. 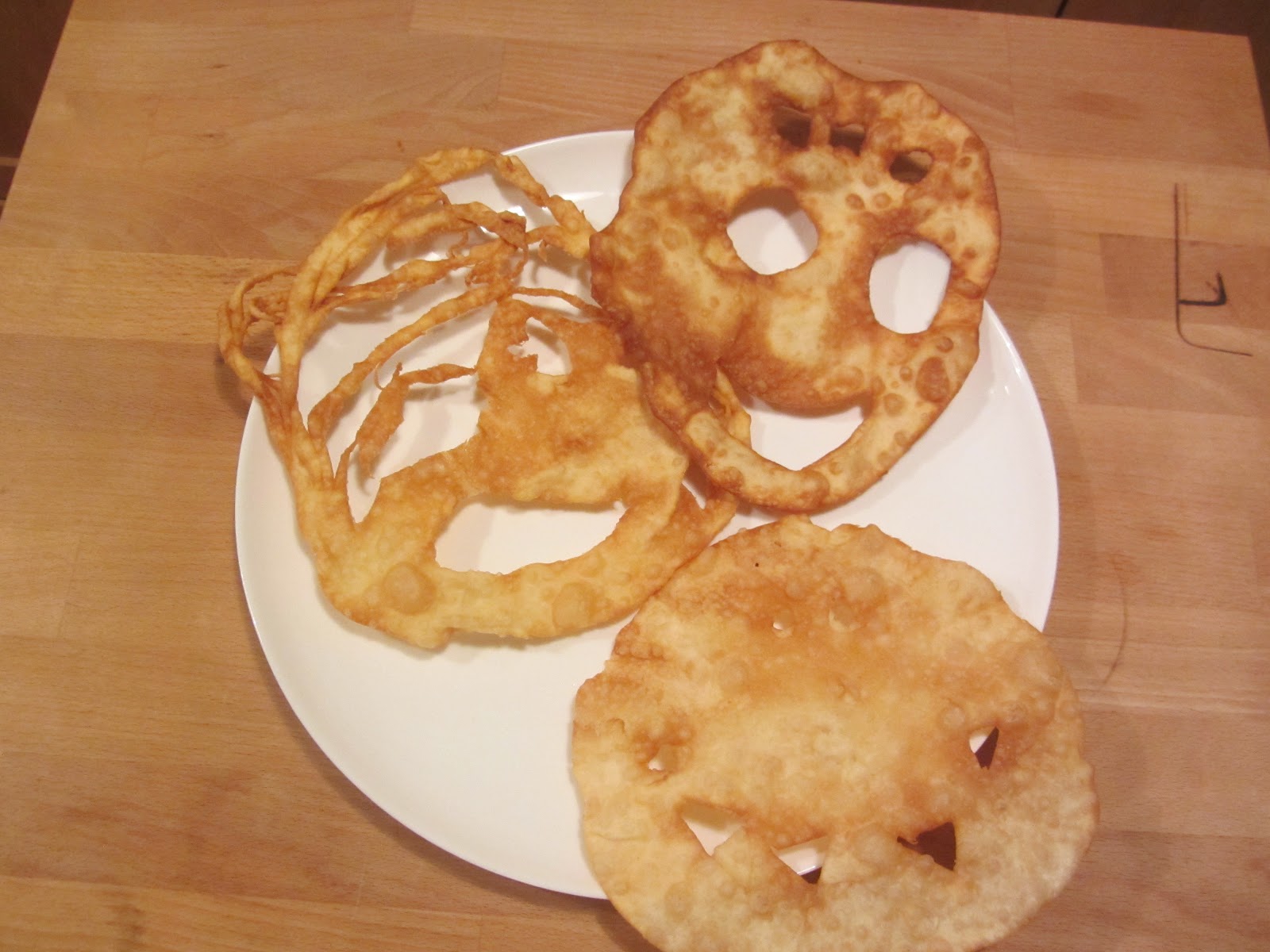 Ask me anything you like and I will try to answer as soon as I can.
For now...
Keep that bread boiling :)
Enjoy.
Posted by Unknown at 01:56

This is where it all goes down ladies and gentlemen...

I have experimented for years in the kitchen making this cake and that cake. Now I'm going to post some of the better recipes here for your eyes only :)

Problem (I've been told) is that I tend to experiment a little too enthusiastically (I think there is no such thing as too much testing).

To paraphrase Heraclitus of Ephesus I never bake the same cake twice.

So I will now attempt to put into Milliliters and Grams and Teaspoons and Tablespoons what I usually shake into a batter when I bake a cake. (Oh yes... I'm going metric, deal with it)

Do try this at home 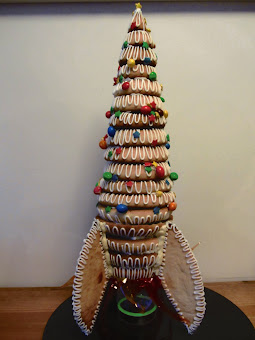